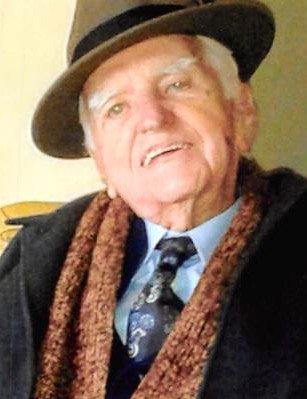 James J. Sweeney, 96, of Kingston, NY, passed away Saturday, April 21, 2018 at Ten Broeck Commons in Lake Katrine, surrounded by his family. He was born February 22, 1922 in Kingston, to the late James and Katherine (Gilday) Sweeney. He was married to his loving wife of 64 years, Eleanor, who entered her final rest on August 12, 2017.


Jim was a graduate of Kingston High School, Pius X School of Music and Manhattanville School of Liturgical Music. He served in the US Army during WW II, in the Signal Corp as a communications specialist. During his time in the service, he was also a member of a band that provided musical entertainment for the officer’s club.


He was a well-known and accomplished musician, having played in local bands since his high school days. He taught music for over 65 years, having taught privately and at area schools.  He had a strong faith, and served as music director for many churches, retiring from St. Joseph’s RC Church after 35 years of service.    He had been a member of the Lions Club, having played in the “Roaring Pride” band, Kingston American Legion Post # 150, the Knights of Columbus and the Kingston Local Musicians Union #518.


He is survived by his children, Linda Amos and her husband Glenn of Phoenix, AZ, Robert Sweeney of Tampa, FL, Kathleen Kabat and her husband David of Red Hook, Michael Sweeney and his wife Deanna of Saugerties, his grandchildren, Christine Oklan and her husband Ben, Daniel Geller, Jennifer Lamm and her husband Joshua, Danielle Frederickson, Taylor and Chase Kabat, his great granddaughters, Grace and Eleanor Oklan as well as several nieces and nephews.


In addition to his parents and wife he is predeceased by his son, James Patrick Sweeney, his grandson, Matthew Sean Sweeney, brothers John and Andrew Sweeney, sisters Marie Glass, Anna Scully           and Rosella Bruck.


Entrusted to the care of A. Carr & Son Funeral Home, 65 Lucas Ave, Kingston, where family and friends may visit on Tuesday, April 24, from 2-4pm and 7-9pm. The funeral procession will form on Wednesday, April 25 at 8:45am and proceed to St. Mary of The Snow, 36 Cedar St., Saugerties, NY 12477 where at 10am a Mass of Christian Burial will be celebrated. Burial will follow in Hurley Cemetery.


In lieu of flowers memorial donations may be made to St. Mary of the Snow-St. Joseph Music Ministry, 36 Cedar St., Saugerties, NY 12477. To leave an expression of sympathy, please visit www.CarrandSonFuneralHome.com

There are no events scheduled.

Dear Mike and Family,
Please know that you are in my thoughts and prayers during this sad time. Jim had a wonderful life, filled with music and close family, and a dear spouse. God bless him and all of you.

I'm sorry I can't be there to say goodbye... I will miss my long time piano teacher and music supporter. I hope there is a choir of angels in heaven for him to play for and for Eleanor to conduct! I send love and sympathy to the members of the Sweeney family.

Our deepest sympathies and heartfelt condolences

The attached photos are added to the memorial of James J Sweeney to help share their legacy.